Gone are the days of random bump and turn robot vacuums. Today’s vacuuming and mopping robots intelligently navigate your home. Here’s how.

When robot vacuums first came on the market, they were about as smart as a rock on wheels. They moved in completely random patterns, stopping only when they hit an object, only to turn and head off in a random direction. If you were lucky, they would eventually cover most of the floor space before they got stuck or lost power somewhere within your home. Then the whole family could join in on the search and rescue mission. That is, if the robot didn’t tumble mindlessly down the stairs first.

Those days are over. Today’s robot vacuums (and the more recent robot mops) use advanced sensors and smart technology to intelligently clean your floors without falling down the stairs or denting your walls and nice dining room chairs.

You can discover more here about the top-rated robot vacuums on the market.

Some devices are still admittedly more random pattern than smart, but even those usually have some programmed cleaning pattern along with cliff and obstacle sensors.

Sensors are the “eyes” of your robotic vacuum and mop 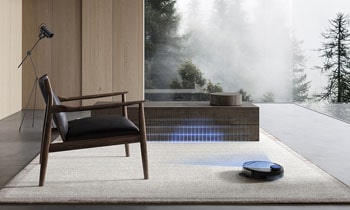 While some of the most advanced devices also employ a camera for navigation, most robotic floor cleaners use a combination of various sensors designed for different purposes to help them “see” the world around them.

Surprisingly, this technology came about largely from AI research based on simple animals such as ants and flatworms. Like those little creatures, robotic cleaners navigate through life by using simple sets of rules to create complex behaviors.

Ants, for instance, don’t need to know exactly how many grains of sand they need to build an anthill. They just need rules on how to behave in certain situations to get it done. These are simple things like pick up a grain of sand, lay it by another grain of sand, and so forth. Eventually, combined with other simple rules and many ants practicing the same behavior, the result is an anthill.

Similarly, robotic vacuums and mops operate on simple rules such as go straight until you hit an object, then turn away from it. Other rules work the same way in the form of various cleaning modes such as spiral and edge cleaning. 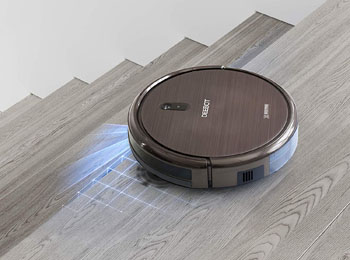 To perform these behaviors requires the robot to use sensors on the top, sides, and bottom of the machine. These most often work by emitting infrared (IR) signals that bounce back and tell the robot if they’re getting close to something. Cliff sensors, for instance, measure the distance between the robot and floor by bouncing an IR signal off it. If no signal bounces back, the robot assumes there’s no floor beneath it (meaning a drop off or stairs), so it stops, backs up, and changes direction.

Sensors in the shock-absorbing bumpers on the sides find obstacles, which allow the machine to gently bump into them so they can clean right up against your furniture without damaging it. Many models, such as Roombas, will slow down when they come near an object to ensure a very gentle collision.

Other sensors include wall sensors to help the robot determine the edges of the space so it can perform edge cleaning and follow the walls into open doors of other rooms. Wheel sensors calculate the number of wheel rotations and how far the vacuum has travelled which helps it follow pre-programmed cleaning algorithms. It also helps more advanced robots to build a map. 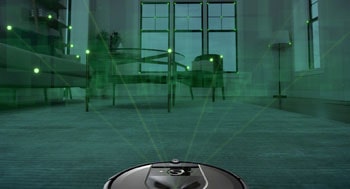 Within the last five or so years, robot vacuum manufacturers have developed advanced features that allow their devices not only build a floor plan map, but to store it and improve upon it. With every subsequent cycle, the robot gets more efficient by building a more accurate map of your home.

In many Roombas, for instance, this is done with VSLAM (visual simultaneous location and mapping) technology. The combined power of several sensors and a digital camera identifies landmarks and judges the distance between walls to create a map as it goes.

This same technology is present in automated cars and smart devices from Google and Apple. It’s also used for drone navigation. 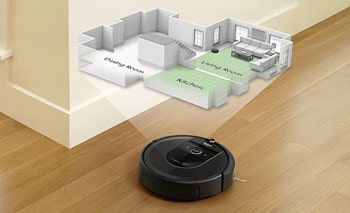 But the magic in mapping is in improved efficiency. By building and storing a map, your robotic vacuum or mop can tell where its already cleaned so it doesn’t keep going over the same spot time after time while ignoring other areas. It can take one simple pass over every clear square inch of floor space and get the job done much quicker, thereby saving battery life and conserving energy.

The difference comes in how the maps are stored. For the most advanced models such as the Roomba 980, you can follow the map building in real time on your mobile device. Unlike earlier models, the 980 and those after it permanently store the maps. The iRobot HOME app allows you to take that a step further by being able to manually section off rooms and other areas on the map itself and even to name them. This allows you to send the robot to specific areas of your home without the need to close doors and block off spaces you don’t want it to go.

Automated devices for the home are only going to get more advanced as the years go by. Expect to see your robotic vacuums and mops integrate with even more smart home appliances like smart TVs, ovens, and refrigerators. We may eventually see robotic vacuums that can pick up and move socks and other objects out of the way. 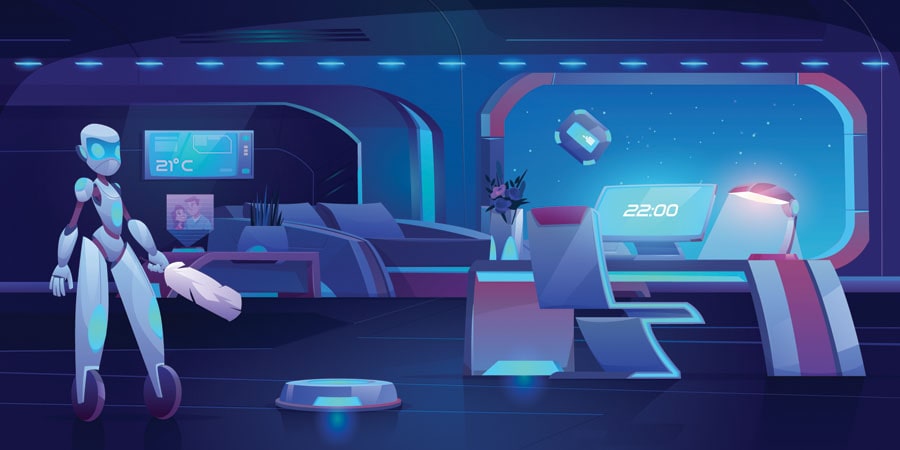 You can also expect to see a rise in even more varieties of robots, including advancements in ones already on the market, such as robotic lawnmowers, window washers, gutter cleaners, and pool vacuums. We could see robotic car washers, pressure cleaners, gardening tools, and dog walkers. The possibilities are endless.

Browse our website for more helpful hints, news, and detailed reviews of the latest in home robotic floor cleaners and other cleaning devices.